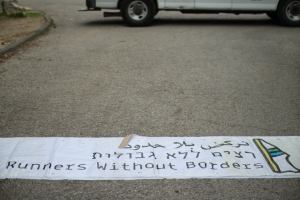 At the beginning of the winter my girlfriend and I broke up, which was great timing, since winter is a great time to drain in sorrow. It’s like a cycle: In September (Jewish New Year is in September-October) you start the year all happy, filled with New Year resolutions, which last until November. From December to February you deny your very existence and any sort of obligation you have in life, such as getting out of bed in the morning. Then, around March you start to realize that life can actually be a happy thing. This year, when the dark winter finally started showing signs of coming to an end, I decided to quit smoking and to get back in shape. That’s another thing I do every year; running a half marathon. No matter how unhealthy or laid back I was during the winter, I always succeed to run half a marathon in May. The challenge is to start making the changes you want; once you’re past the starting point, everything else is a piece of cake. However, those first two weeks of running slowly and suffering so much, will make you  want to quit at least 5 times before you succeed. This year I heard of a very small running event in Jerusalem, hosted by an amazing project called ‘Runners Without Borders’. 3 km – that’s all, nothing dramatic. I thought to myself that this mini race would be a great way to start my healthy life again, so I signed up and started training. I heard the whistle, and automatically start running. The air is a specific kind of high altitude-Jerusalem mountain air, unlike the kind you have by the sea. I know the first couple of seconds of the race are crucial – if you pass 80% of the people right at the start, you can then stay where you are. Breathing was hard, the air was thin and I didn’t get the amount of oxygen I needed. I started breathing fast and heavily, but I was focused. I wanted to prove to myself that I could do this. I turned my head up, looking, even smiling, at my fellow runners: 120 people who kept racism out of their lives,  different and yet so similar, no boundaries, no prejudice; just runners. We were reaching a turn, right below the Palestinian neighborhood Jabal Mukaber, and all of a sudden I saw the Temple Mount appears right in front of me. At the top I saw the Dome of the Rock shining in all it’s glory. For one short second I forgot how my body was aching. For one short second I forgot everything. I looked around and saw a friend running beside me. It was hard talking while running, also as you saw my Arabic is pretty limited…so we finished the conversation with a smile and continued the race. We arrived to the finish line one after the other, almost at the same time. What  makes this experience so special? I’ve been part of many cross border projects, why would I tell you about this little Friday event specifically? What made it so special is the fact that it wasn’t special at all. I did not come to the race to talk to different people and create a dialogue. All I wanted was to make my life a little better, so I signed up for a race. It wasn’t a special occasion for Jews and Arabs to run together, it was just a normal running event.  I wish, for all of us, talking to different people will never feel special or unique, but that it will just feel normal. Without fear.
Categories: in English, Human Rights
Comments: 0 Comments
Tags: #yalaalumni, diversity, israel, IsraelPalestine, jerusalem, palestine, runnerswithoutborders, running
https://yala-press.com/wp-content/uploads/2020/01/The-Real-Voices-of-the-Middle-East-and-North-Africa-3-e1578486220136.png 0 0 yotam https://yala-press.com/wp-content/uploads/2020/01/The-Real-Voices-of-the-Middle-East-and-North-Africa-3-e1578486220136.png yotam2017-03-21 15:28:002017-03-21 15:28:00Running Without Borders by Yair Arieli, Israel