Last Sunday I was in Montreal.

One of the main goals of my trip was to attend the Pride Parade for the first time ever!

Downtown was packed!  Hundreds of people came from all the nations and backgrounds, heterosexual couples from all ages and religions.  There was an elderly  East Asian couple standing behind me the whole time, smiling and chatting with a lesbian couple. I heard them talking about the difference between East Asia countries and Canada when it comes to LGBT rights.  Right next to us I noticed a very powerful sign about queer kids; I asked the lady holding it if I could take a photo and she accepted: 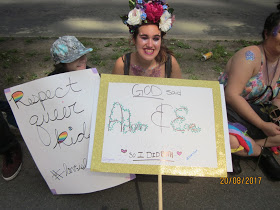 In Canada you don’t have to get married in order to be recognized as a couple; also children of gay and lesbian couples will be recognized and treated like the children of straight couples!
One of the mums told me that some people don’t respect queer kids or children of gay couples because of   religious reasons.  Even if the kids don’t get physically hurt, they are sometimes bullied at school. She and her wife came to the parade with these huge signs in solidarity with all Queer kids!
We chatted for 20 minutes before the parade started.  Of course the Prime Minister Justin Trudeau was there too!
After I took the following photo of him holding the LGBT flag I stayed wondering how long it would take before we could see an Arab leader doing the same… 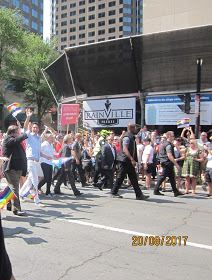 Actually there is no need to travel all the way to the MENA region to find hateful people….Just next to Canada, some people call themselves “The Ku Klux Klan”, or  “KKK”. These people are not only against Jews and Black people, if you are part of the LGBT community your life is at risk with the KKK around! This is why I admired so much the 2 next signs: 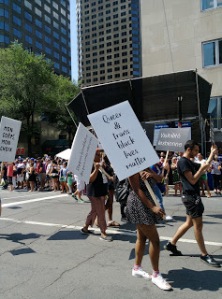 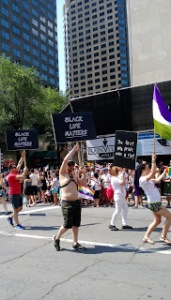 Then the “Liberal Party” people showed their support with all these flags and signs. Is it so pretty when politics and civil society stand together! 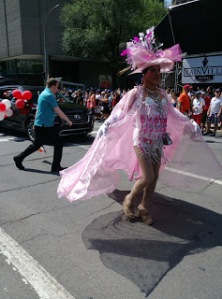 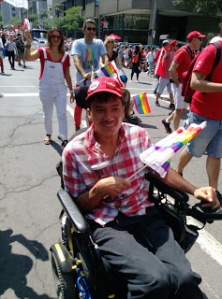 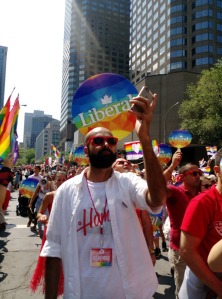 Finally the big surprise for me was seeing signs in Arabic.  It read: It takes courage. Helem is a Lebanese organization in Montreal that supports the Arab LGBT community. They made us observe a minute  of silence in solidarity with the LGBT community  in the MENA region. It was so epic to see the Lebanese flag beside the Syrian Tunisian Algerian and Egyptian flags! Later they started to dance and spread some joy and fun! 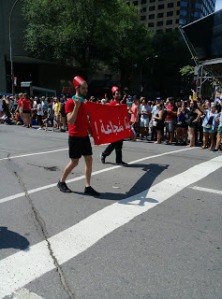 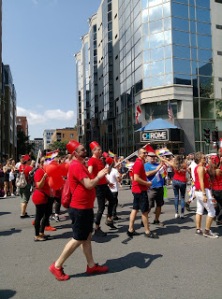 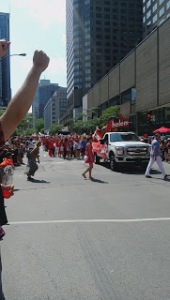 At the end of the parade my thoughts stayed withe the LGBT community all around the world. People who can’t live their life without being afraid and threaten by their own  society and government. People who have to live a double life in order to have a future…

The feeling of guilt by Khadija Amahal, Morocco