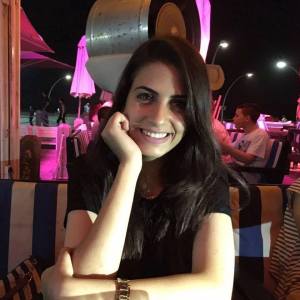 Four years ago my dad was elected for the first time to be a member of the Knesset, which is similar to the congress. He was the 5th member of the party called “Meretz”. It was one of the happiest moments for him, his family, and his friends. He finally achieved what he was aiming  and wishing for and he got what he deserved, which is a chance for his voice to be heard.You see, Meretz, for those of you who don’t know, is a left wing party here in Israel that fights for justice and humanity. And since Meretz has the perfect combination for this country, in my opinion, which is Jews and Arabs in one party, it aroused some friction between my family and some of the people.

I was raised on loving the other side, loving people even if they were Jews because we are all one at the end. I was raised to respect the other, to never judge, to always be understanding and kind and to be a friend to all. And I have. But not all people think the same, or believe the same at least. After the election I faced some difficulties with some people. I had to hear a lot of things about my dad, my beliefs, my opinions: either it was in real life or on social media. Because the truth is, a lot of Arabs here have this grudge and hate towards Jews for occupying Palestine. They don’t get that NOT all Jews are like this, they don’t get that there is another side to every story.

Some of the things that I read about my dad in social media was that he is “a traitor”. That he’s not with his “own kind”, that “he’s a Jew”. Although I never let it get through me because I always knew that what I believe in is what’s right and I never really cared about what’s been said, even if it was said to my face. From one end I face hate from Arabs who think I’m “a Jew loving person”, that I’ll always defend them no matter what, and that’s a thing that’s been said to me. On the other end, we face hate from right- racist Jews who will always hate us for simply being Arabs.

I remember in the last elections, me and my sisters have always supported our dad, and we were called “Jews” and “traitor”. It’s funny but they even started shouting “go to your Jewish friends”. I think this whole experience has changed and is still changing me as a person. It showed me that in life you will be attacked for what is right, for your beliefs, or even simply because you’re different. This whole thing even made me more sure and positive about my stance and what I stand for. It made me see the way people think and the “logic” they use for their hate and grudges. People are rejecting to accept the other because some of them feel it is unfair what has been done to Palestine or they have been just raised to hate Jews and to not accept them. They look back instead of looking forward to a better future, a better life here in Israel at least. And that’s the story of my life.

This is just one example of the important work produced YaLa’s citizen journalists, a program funded by the European Union’s Peacebuilding Initiative in order to enable young leaders from across the Middle East and North Africa to document and share their experiences of the region.

Yemenites with No Religious Differences by Mokhtar Ramadan, Yemen

An Experience Abroad: A Journey of Education, Self-Exploration, and Diversity...
Scroll to top