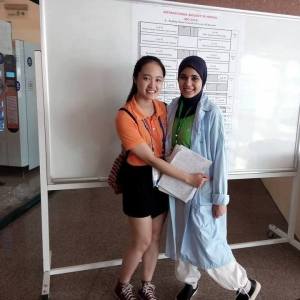 It was 11 pm when my plane took off heading to Vietnam. I was so excited, anxious, and happy because not only would I represent Egypt in an international competition, but I would also meet new people from 74 different countries in the competition. I didn’t close my eyes to sleep for even half an hour during my 15 hour trip. A lot of questions were in my mind, like how would I introduce myself to people from different cultures, how would I tell them about Egyptian culture, and how could I leave a good memory with them?

When I arrived in Vietnam I met my guide first, a cute, outgoing, and sociable girl called Shushu. I was so glad to meet Shushu, and I thought that the participants would be absolutely friendly like her. When I reached the hotel, the participants took lunch first. I anticipated that other participants would take the initiative, and they would come and introduce themselves to me. However, that didn’t happen and I felt so upset. During breakfast the day after my arrival, two girls from Pakistan wearing hijabs came and sat at my table and started talking with me. I also met some other guys in the elevator from Cyprus, and they friendly introduced themselves but that was it.

I was so concerned about why other participants didn’t come to introduce themselves and talk with me. I put a lot of possibilities like they might be afraid of talking with me because I was wearing a hijab, or they might have a bad background about Egypt, Arabs, or Islam. Finally, I decided that no matter what they thought about me I would like to know them, and I would take the initiative and break the ice. I started finding ways to get in contact with those participants, like sitting and eating dinner with them, playing group games during the social events at night, giving souvenirs, taking photos with them, and trying to introduce myself in a creative and funny way.

I found out that some of them were friendly when I talked with them, but they didn’t have the courage to start a conversation. Others though that- with my culture -I would not be comfortable talking with them .. so I talked to them until I proved the opposite. At the end I got along with many of the participants and I made a lot of international friends. I spent the last night with them playing and partying. On The last day, all of us were sad, and we cried because we had to leave each other. I hope I will meet them again . Frankly, I learned from this journey that it is better to start and take the initiative instead of wasting time on atrocious expectations.

“A lot of people never use their initiative because no-one told them to.”

A journey to the center of Tunisian youths’ minds by Lina Azaiez, Tun...

Near the Sea by A. from Gaza, Palestine – Photo Essay –
Scroll to top